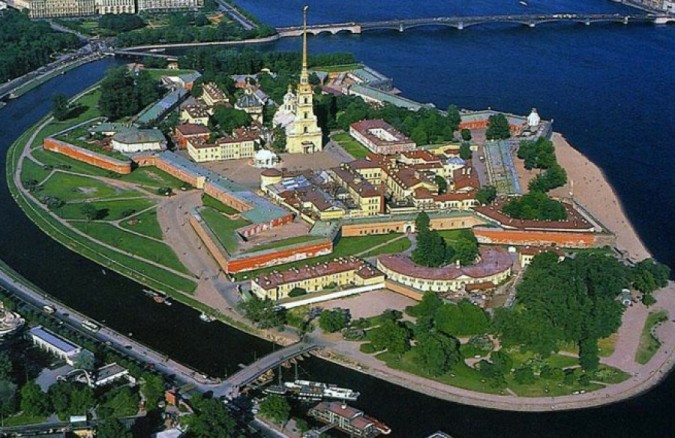 The first building in Sankt-Piter-Burkh, as the city was then called, the fortress was erected in just one year, between 1703 and 1704, during the Great Northern War against Sweden. It was never used for its intended purpose, however, as the Russian line of defense quickly moved farther north, and, in fact, the war was won before the fortress was mobilized. Instead, the fortress served mainly as a political prison, primarily under the tsars. The date on which construction began on the fortress is celebrated as the birth of St. Petersburg.

Entrance to the inner fortress is through St. Peter's Gate (Petrovskiye Vorota). Designed by the Swiss architect Domenico Trezzini, it was built from 1717 to 1718. After you pass through St. Peter's Gate, the first building to your right is the Artilleriisky Arsenal, where weaponry was stored. Just to your left is the Engineer's House (Inzhenerny Dom), which was built from 1748 to 1749. Now a branch of the Museum of the History of St. Petersburg (as are all exhibits in the fortress), it presents displays about the city's prerevolutionary history.

As you continue to walk down the main center lane, away from St. Peter's Gate, you soon come to the main attraction of the fortress, the Cathedral of Saints Peter and Paul (Petropavlovsky Sobor). Constructed between 1712 and 1733 on the site of an earlier wooden church, it was designed by Domenico Trezzini and later embellished by Bartolomeo Rastrelli. It's highly unusual for a Russian Orthodox church. Instead of the characteristic bulbous domes, it's adorned by a single, slender, gilded spire whose height (400 feet, 120 meters) made the church the city's tallest building for over 200 years. The spire is identical to that of the Admiralty across the river, except that it's crowned by an angel bearing a golden cross. The spire remained the city's highest structure—in accordance with Peter the Great's decree—until 1962, when a television tower was erected.

The interior of the cathedral is also atypical. The baroque iconostasis, designed by Ivan Zarudny and built in the 1720s, is adorned by freestanding statues. Another uncommon feature is the pulpit. It's reputed to have been used only once, in 1901, to excommunicate Leo Tolstoy from the Russian Orthodox Church for his denouncing of the institution. You can exit the cathedral through the passageway to the left of the iconostasis. This leads to the adjoining Grand Ducal Crypt (Usypalnitsa), built between 1896 and 1908. You can identify Peter the Great's tomb by the tsar's bust on the railing on the far right facing the iconostasis.

As you leave the cathedral, note the small classical structure to your right. This is the Boathouse (Botny Domik), built between 1762 and 1766 to house Peter the Great's boyhood boat. The boat has since been moved to the Naval Museum on Vasilievsky Island, and the building is not open to the public.

The long pink-and-white building to your left as you exit the cathedral is the Commandant's House (Komendantsky Dom), erected between 1743 and 1746. It once housed the fortress's administration and doubled as a courtroom for political prisoners. The Decembrist revolutionaries were tried here in 1826. The room where the trial took place forms part of the ongoing exhibits, which deal with the history of St. Petersburg from its founding to 1917. Across the cobblestone yard, opposite the entrance to the cathedral, stands the Mint (Monetny Dvor), which was first built in 1716; the current structure, however, was erected between 1798 and 1806. The mint is still in operation, producing coins, medals, military decorations, and znachki (Russian souvenir pins). The coins that were taken along on Soviet space missions were made here.

Take the pathway to the left of the Commandant's House (as you're facing it), and you'll be headed right for Neva Gate (Nevskiye Vorota), built in 1730 and reconstructed in 1787. As you walk through its passageway, note the plaques on the inside walls marking flood levels of the Neva. The gate leads out to the Commandant's Pier (Komendantskaya Pristan). Up above to the right is the Signal Cannon (Signalnaya Pushka), fired every day at noon. From this side you get a splendid view of St. Petersburg. You may want to step down to the sandy beach, where even in winter hearty swimmers enjoy the Neva's arctic waters. In summer the beach is lined with sunbathers, standing up or leaning against the fortification wall.

As you return to the fortress through the Neva Gate, you'll be following the footsteps of prisoners who passed through this gate on the way to their executions. Several of the fortress's bastions, concentrated at its far western end, were put to use over the years mainly as political prisons. One of them, Trubetskoi Bastion, is open to the public as a museum. Aside from a few exhibits of prison garb, the only items on display are the cells themselves, restored to their chilling, prerevolutionary appearance. The first prisoner confined in its dungeons was Peter the Great's own son, Alexei, who was tortured to death in 1718 for treason, allegedly under the tsar's supervision. The prison was enlarged in 1872, when an adjacent one, Alexeivsky Bastion, which held such famous figures as the writers Fyodor Dostoyevsky and Nikolai Chernyshevsky, became overcrowded with dissidents opposed to the tsarist regime. A partial chronology of revolutionaries held here includes some of the People's Will terrorists, who killed Alexander II in 1881; Lenin's elder brother Alexander, who attempted to murder Alexander III (and was executed for his role in the plot); and Leon Trotsky and Maxim Gorky, after taking part in the 1905 revolution. The Bolsheviks themselves imprisoned people here for a short period, starting with members of the Provisional Government who were arrested and "detained for their own safety" for a few days, as well as sailors who mutinied against the Communist regime in Kronshtadt in 1921. They were apparently the last to be held here, and in 1925 a memorial museum (to the prerevolutionary prisoners) was opened instead. Some casements close to the Neva Gate have been converted into a printing workshop (pechatnya), where you can buy good-quality graphic art in a broad range of prices. Original late-19th-century presses are used to create lithographs, etchings, and linocuts depicting, most often, urban St. Petersburg landscapes, which make nice alternatives to the usual souvenirs. In the basement, the original foundations were excavated; different layers of the history of the fortress can thus be seen.