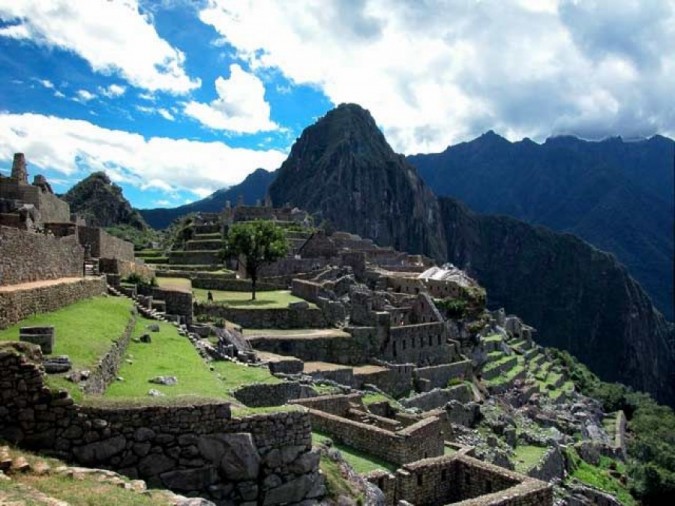 The ruins of Machu Picchu, rediscovered in 1911 by Yale archaeologist Hiram Bingham, are one of the most beautiful and enigmatic ancient sites in the world. While the Inca people certainly used the Andean mountain top (9060 feet elevation), erecting many hundreds of stone structures from the early 1400´s, legends and myths indicate that Machu Picchu (meaning ´Old Peak´ in the Quechua language) was revered as a sacred place from a far earlier time.

Whatever its origins, the Inca turned the site into a small (5 square miles) but extraordinary city. Invisible from below and completely self-contained, surrounded by agricultural terraces sufficient to feed the population, and watered by natural springs, Machu Picchu seems to have been utilized by the Inca as a secret ceremonial city. Two thousand feet above the rumbling Urubamba river, the cloud shrouded ruins have palaces, baths, temples, storage rooms and some 150 houses, all in a remarkable state of preservation.

These structures, carved from the gray granite of the mountain top are wonders of both architectural and aesthetic genius. Many of the building blocks weigh 50 tons or more yet are so precisely sculpted and fitted together with such exactitude that the mortarless joints will not permit the insertion of even a thin knife blade. Little is known of the social or religious use of the site during Inca times. The skeletal remains of ten females to one male had led to the casual assumption that the site may have been a sanctuary for the training of priestesses and /or brides for the Inca nobility. However, subsequent osteological examination of the bones revealed an equal number of male bones, thereby indicating that Machu Picchu was not exclusively a temple or dwelling place of women.

One of Machu Picchu´s primary functions was that of astronomical observatory. The Intihuatana stone (meaning ´Hitching Post of the Sun´) has been shown to be a precise indicator of the date of the two equinoxes and other significant celestial periods. The Intihuatana (also called the Saywa or Sukhanka stone) is designed to hitch the sun at the two equinoxes, not at the solstice (as is stated in some tourist literature and new-age books). At midday on March 21st and September 21st, the sun stands almost directly above the pillar, creating no shadow at all.

At this precise moment the sun "sits with all his might upon the pillar" and is for a moment "tied" to the rock. At these periods, the Incas held ceremonies at the stone in which they "tied the sun" to halt its northward movement in the sky. There is also an Intihuatana alignment with the December solstice (the summer solstice of the southern hemisphere), when at sunset the sun sinks behind Pumasillo (the Puma´s claw), the most sacred mountain of the western Vilcabamba range, but the shrine itself is primarily equinoctial.

Shamanic legends tell that when a sensitive person touches their forehead to the Intihuatana stone it opens their vision to the spirit world. Intihuatana stones were the supremely sacred objects of the Inca people and were systematically searched for and destroyed by the Spaniards. When the Intihuatana stone was broken at an Inca shrine, the Inca believed that the deities of the place died or departed.

The Spaniards never found Machu Picchu, even though they suspected its existence, thus the Intihuatana stone and its resident spirits remain in their original position. The mountain top sanctuary fell into disuse and was abandoned some forty years after the Spanish took Cuzco in 1533. Supply lines linking the many Inca social centers were disrupted and the great empire came to an end.

The photograph shows the ruins of Machu Picchu in the foreground with the sacred peak of Wayna Picchu towering behind. Partway down the northern side of Wayna Picchu is the so-called "Temple of the Moon" inside a cavern. As with the ruins of Machu Picchu, there is no archaeological or iconographical evidence to substantiate the "new-age" assumption that this cave was a goddess site.