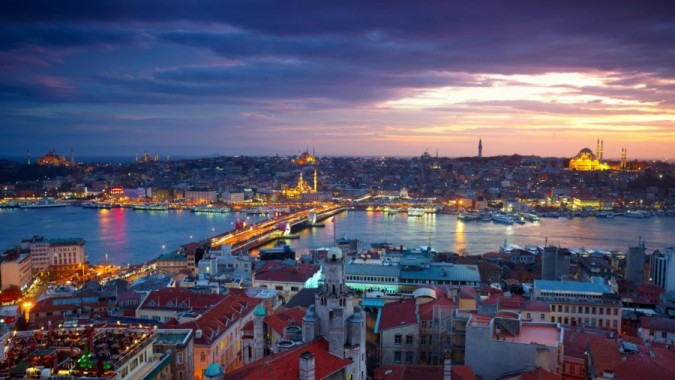 Even first time visitors to Istanbul will quickly be enthralled by how fun and fascinating Istanbul really can be. For those looking a glimpse of the real Turkey, or just a fun night out, Istanbul mixes old world charm with a modern and vibrant night life.

Istanbul is the only city in the world that sits on two continents. It is a fusion of the East and West, and has a rich and detailed history dating back to 3000 BC. Since its beginnings, the city has been used as a trading passage and has been known as a centre for world trade since the Byzantine era. It sits on seven hills, with one half of the city in Europe and the other half in Asia, separated by a body of water known as the Bosphorus.

Istanbul is a shopper´s paradise. Long are the days of selling slaves. Today, stalls sell beautiful Turkish trinkets, rugs, spices and jewellery. It is a thriving city, and although no longer the capital of Turkey, it still holds a great importance throughout the country.

There are many places to visit here which tell the story of Istanbul´s past. You will find countless museums, monuments, mosques and palaces, all rich in history. Art enthusiasts will also be impressed by the many art galleries that can be found throughout the city.

Dining opportunities in Istanbul are endless. There is a wide variety of cuisine, ranging from traditional kebabs and mezze to Chinese dishes and American-style take-away.

The history of Istanbul dates back to 3000 BC, when the first inhabitants settled in the city. This community lived a very basic and peaceful life for thousands of years. In the 7th century BC, King Byzas led his Greek army to the city, occupied it and renamed it Byzantium.

The city was later conquered by the Romans in the 1st century BC, when the city really began to thrive. In 306 AD, the Roman Emperor Constantine made Byzantium the capital of the entire Roman Empire and the city was renamed Constantinople. Throughout the 5th century AD, there was a lot of upheaval and change. Barbarians conquered the Western Roman Empire, while the Eastern Empire, also known as the Byzantine Empire, continued to grow and develop, keeping Constantinople as its capital. Riots destroyed the city in the 6th century AD and it was rebuilt with many buildings that still stand today.

Throughout the next few centuries, Persians and Arabs continually attacked Constantinople. The city, weakened by these constant battles, finally gave in and was conquered by the Ottoman Empire in 1453. It was renamed Istanbul and became the third and last capital of the Ottoman Empire. By the middle of the 16th century, the city´s population had increased to nearly half a million people and the city was a leading cultural and political centre.

The Ottoman Empire was defeated in WWI and Istanbul was occupied by the Allies. The Republic of Turkey was formed in 1923, after the War of Independence, and Ankara became the new capital. Despite losing its capital city status, Istanbul continued to expand and today the estimated population is approximately 13 million. Industry and tourism have developed and the city is now a thriving hub of activity.