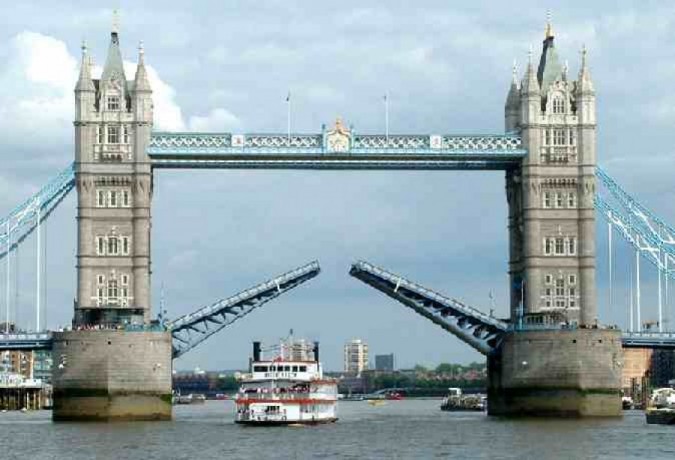 This is one of the iconic structures of London – so much so that an urban myth has it that the rich American who bought London Bridge to erect in the Arizona desert actually thought he was getting this one and was disappointed when he realised what he had purchased! I’m not sure if that’s true, but if you think about bridges over the Thames this one will inevitably come to mind.

Tower Bridge was completed in 1894, and was considered one of the great engineering marvels of its age. It was the first to be built east of London Bridge, and its design was a response to the problem of constructing a bridge over a stretch of the river where shipping was so busy. The road crosses the river on two “bascules” – sections which can be raised to allow for ships to pass through. High above these a walkway was intended to allow pedestrians to cross even when the bascules were raised, but was closed as it was found that most people preferred simply to wait. Nowadays this walkway houses an exhibition about the history of the bridge and offers great views of the river (or so I’ve heard – I’ve yet to visit myself).

Although river traffic is not as busy as it once was, the bridge is still lifted approximately 1000 times a year to allow tall ships, cruise ships, naval vessels and other large craft to pass through. If you want to time your visit to coincide with a lift, check out the schedule on the website.